Rise uses a method of ranking leaderboard “players” which converts actual "metric” values to a number between 1-100. This is called the Rise relative scoring algorithm.

To explain this, let’s look at  the Sunday Times Rich List shown below.  The “players” are the billionaires, the “metric” is the Worth column and the wealth figures are the actual “metric” values. 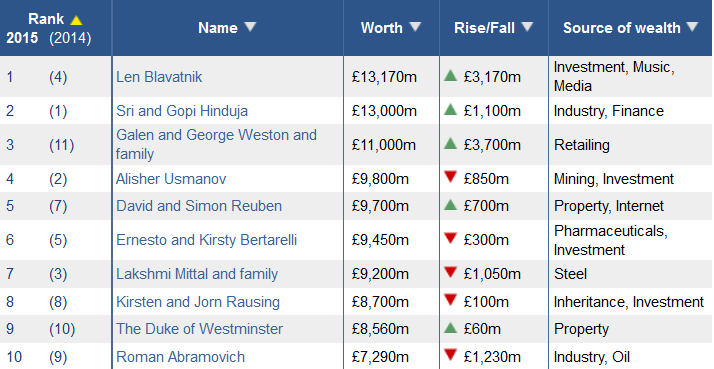 The Rise version of this leaderboard, when the actual wealth values are used to rank the billionaires, i.e. using an absolute scoring algorithm, would look exactly the same as shown below: 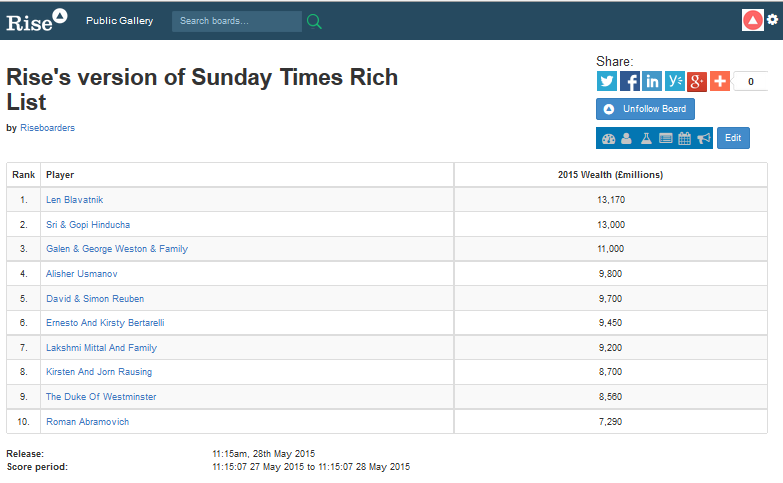 However, if Rise’s relative scoring algorithm is used, the leaderboard would look like this: 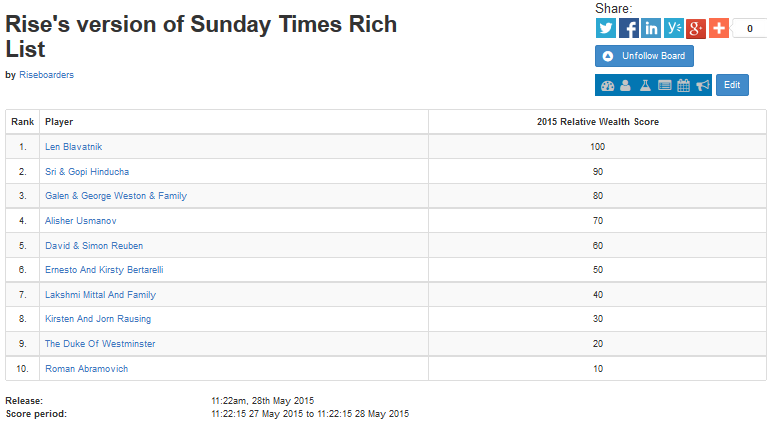 Comparing the two versions of the leaderboard, based on the same underlying data:

The “Wealth” scores in the Rise relative scoring algorithm version do not give any information about the actual wealth of these rich people. But, like in the absolute scoring algorithm, they do allow the correct ranking of the billionaires and also allow you to compare the relative wealth of any two (or three or four etc) billionaires correctly.  So, if you knew Lakshmi Mittal had a wealth score of 40 and Alisher Usmanov had a wealth score of 70, you would be able to say that Usmanov is richer than Mittal.

There are very good reasons for doing so:

The primary objective of the leaderboard is to give feedback to the player about where they rank in relation to their colleagues, or how their scores vary over time.

For example, if we want to measure the performance of individuals in a sales team, we may want to measure each individual’s revenues, number of sales calls and number of customers.  The numbers for each of these metrics could have vastly different scales - the revenue numbers may be in millions, the sales calls in hundreds and the number of customers in tens.  It would be inappropriate to just sum up these 3 numbers for each sales person to get a value for their overall sales performance, as it would be like adding apples, oranges and bananas.

One solution is to convert the raw values of each metric into a number between 1-100 in a way that preserves the ranking order of the raw values, and then sum up these 3 “relative” values to get the final composite score.  This is exactly what Rise does with its relative scoring algorithm.

If you are not mathematically minded, feel free to miss the articulation of Rise’s formula and move onto the example.

Suppose there are N players on a leaderboard.  Rise’s relative scoring algorithm for the nth ranked player is calculated as follows, with 1 being the top rank:

We are trying to measure who is happiest: James, Susan or Liz.

We believe happiness is derived from 3 metrics:

How many friends do you have?

How much is your annual income?

How many hobbies do you have?

Using the Rise relative scoring algorithm, we get the following results:

We have made changes to increase our security and have reset your password.